Layered architecture is the de facto standard for most Java EE applications and therefore is widely known by most developers, and has become a natural choice for most business application development.

Components within the layered architecture pattern are organized into horizontal layers, each layer performing a specific role within the application. For example, we can divide all source code into four layers:

More or less layers are acceptable, depending on the scale of your application. In fact there are various layering theories, but they share the same principles.

The feature of separation of concerns among components brings into layers of isolation, which means high changeability or even replaceability of each layers, for they are independent of the other layers. And we call these layers closed because every layer prevent its upper layer from knowing anything about its lower layers. 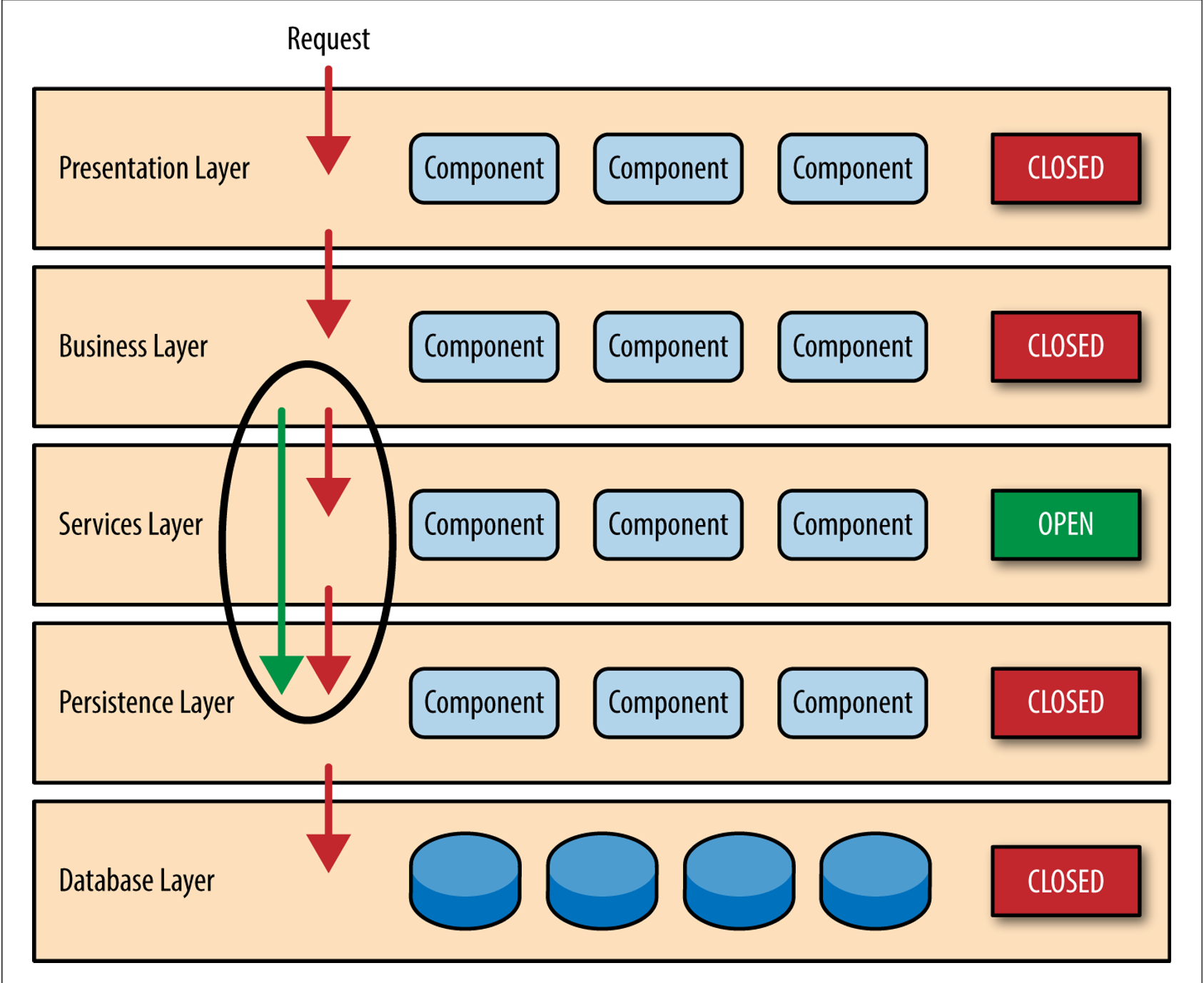 Here are two things to consider when using layered architecture:

The event-driven architecture is made up of highly decoupled, single-purpose event processing components that asynchronously receive and process events. This architecture consists of two main topologies: mediator topology and broker topology. Characteristics and implementation strategies differ between these two topologies.

A system of event-driven architecture takes every input as a event, and it'll be dispatched to a certain component somehow to be processed.

If you're dealing with events that have multiple steps and require some level of orchestration to process the event, here is mediator topology.

There are four parts in this type of architecture:

And this is how they work:

If your event processing logic is simple enough so that you don't want or need a central event mediator to perform orchestration, you can choose this broker topology.

There are two parts in this type of architecture:

And this is how they work:

Softwares based on microkernel architecture are easy to append additional features as plugins.

This architecture consists of two types of components:

This architecture can be embedded or used as part of another architecture. And it's the first choice when developing a software which will be adjusted frequently to respond to users' requirement.

Microservices architecture gains its big siginifiance in software industry. Theories about this architecture are still evolving, but basically it's a viable alternative to monolithic applications and service-oriented architectures.

There are several common core concepts that apply to the general architecture pattern.

There are two main sources of motivation to this architecture: one is the challenge of the continuous delivery for monolithic applications, another is the practice of service-oriented architecture pattern (SOA, an architecture for huge scale applications).

The API REST-based topology is useful for websites that expose small, self-contained individual services through some sort of API. In this topology, these fine-grained service components are typically accessed using a REST-based interface implemented through a separately deployed web-based API layer. 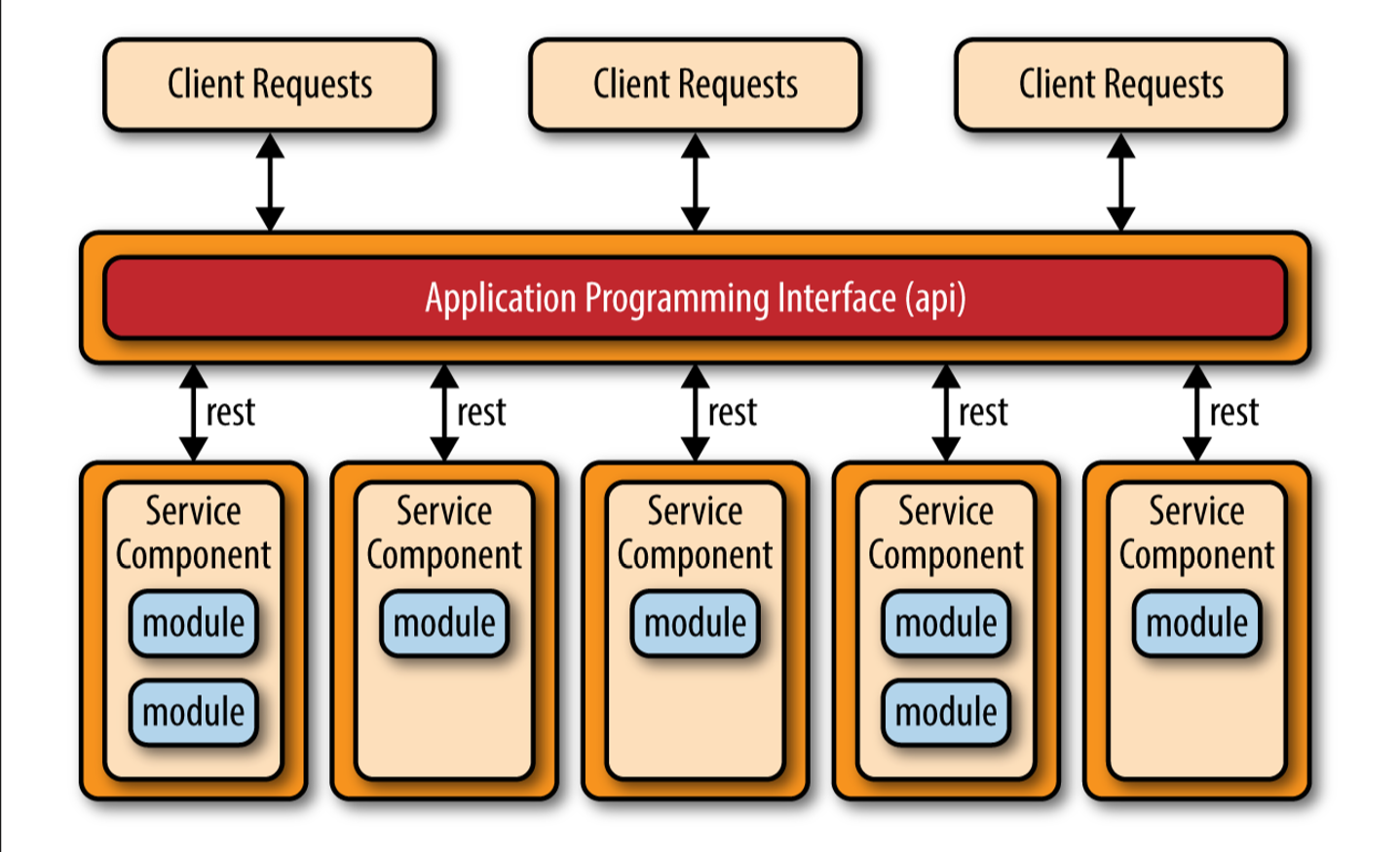 The application REST-based topology differs from the API RESTbased approach in that client requests are received through traditional web-based or fat-client business application screens rather than through a simple API layer.

The service components in this topology differ from those in the API-REST-based topology in that these service components tend to be larger, more coarse-grained, and represent a small portion of the overall business application rather than fine-grained, singleaction services. This topology is common for small to medium-sized business applications that have a relatively low degree of complexity.

The centralized messaging topology is typically found in larger business applications or applications requiring more sophisticated control over the transport layer between the user interface and the service components. The benefits of this topology over the simple REST-based topology discussed previously are advanced queuing mechanisms, asynchronous messaging, monitoring, error handling, and better overall load balancing and scalability.

The single point of failure and architectural bottleneck issues usually associated with a centralized broker are addressed through broker clustering and broker federation (splitting a single broker instance into multiple broker instances to divide the message throughput load based on functional areas of the system). 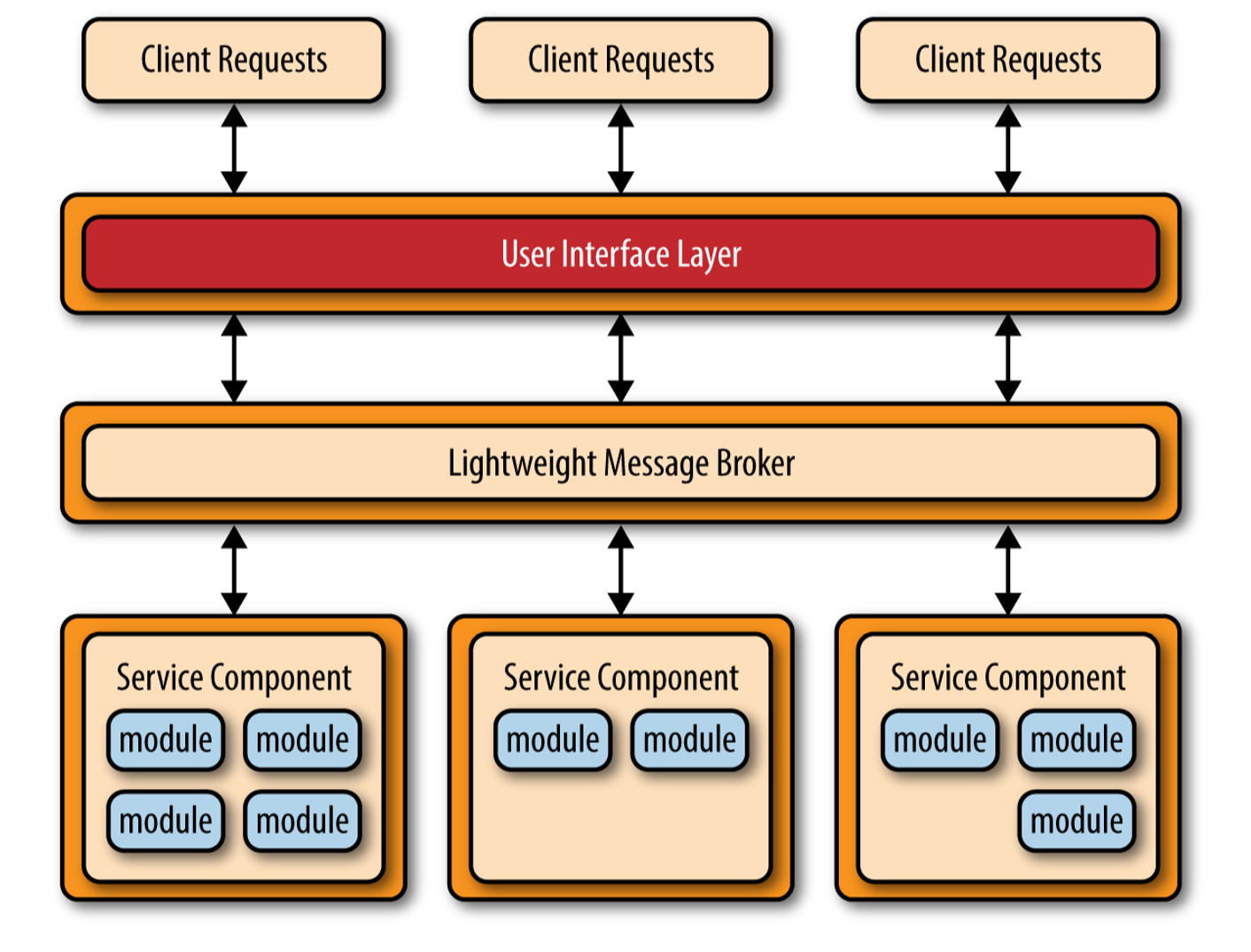 The space-based pattern (also sometimes referred to as the cloud architecture pattern) minimizes the factors that limit application scaling. Most applications that fit into this pattern are standard websites that receive a request from a browser and perform some sort of action.

There are two primary components within this architecture pattern:

There are four main architecture components in the virtualized middleware. We'll talk below.

When a request comes into the virtualizedmiddleware component, the messaging-grid component determines which active processing components are available to receive the request and forwards the request to one of those processing units.

An optional component within the virtualized middleware that manages distributed request processing when there are multiple processing units, each handling a portion of the application.

Although the space-based architecture pattern does not require a centralized datastore, one is commonly included to perform the initial in-memory data grid load and asynchronously persist data updates made by the processing units. It is also a common practice to create separate partitions that isolate volatile and widely used transactional data from non-active data, in order to reduce the memory footprint of the in-memory data grid within each processing unit.